Richard collected me for work, this morning, as he does every morning.

Richard makes sure I am never late for work. Ever. (See Day#10 )

Richard drives me home every evening.

When our pitch meeting ended at 23:17, on a Saturday night, Richard was there waiting to take me home.

Richard drives the same route, every time he takes me home, “so that I can learn the way”.

Richard was there on my first day to collect me from the airport. (On a public holiday.)

Richard carried my surfboard up to my 5th- floor apartment. (Even when I insisted I would do it myself.)

Richard and Pamela filled my apartment, before I arrived, with everything I could possibly need.

Richard walked me to my apartment door every night. (Until I realised this was because he had doubts about my sense of direction! See Day#5 .) 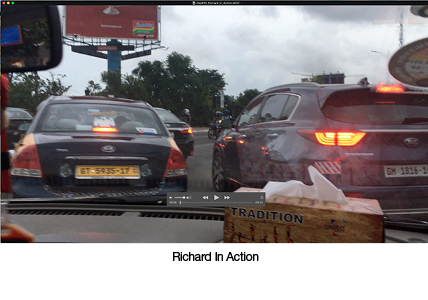 On our drives Richard and I talk about politics, and government, and religion, and culture, and family, and recycling, and.. and.. and..

I ask Richard all the questions I have about life in Ghana.

Richard gives advise on how to pronounce words, buy mobile money, where to go for what, how to sort out Charlies (See Day#11 ), and.. and.. and..

When I was desperate for my first Nice Cup Of Tea ( See Day#4 ), Richard opened the Ideal Milk can for me with a screwdriver.

One evening, Richard was not feeling well, so when he dropped me off I went upstairs to fetch him some of my medicine. There was some water on the floor in the kitchen – it had rained in. A couple of minutes after Richard left there was a knock on the door. Richard had asked the caretaker (also Richard) to take care care of the water on the floor!

(To my Dad’s delight) Richard asked whether he and his wife can pick me up for church on Sunday. (See Day#3 )

Richard teaches me stuff: On one drive, Richard points to a building and says “This house has problems”. Absentmindedly I stare out the window at the house, wondering whether the problems entailed damp, infestation, structural issues, planning permission? Looks like an aspirational building, a dozen black Range Rovers parked outside. Says something-something spa. ..Wait. ..OH! Thoooooose kind of problems. “Richard, is that a house of ill repute?” Richard just laughed.

But my favourite Richard moment, by far, is this one:

In my desperate search for a kettle (See Day#4 ) I asked Richard to drive me to A&C mall last Saturday.

(Not realising Richard does not actually work on a Saturday! And he did not say anything when I asked him to pick me up!)

When we arrive at the mall, I jump out of the car. Envisioning an exploratory exhibition, and maybe even a Flat White (one could dream!).

I turn around to tell Richard that I would call him, to collect me, once I was done. But Richard was already standing behind me.

No, he is coming with me. Uhm.. how is this going to work? We walk into the supermarket.

I take a wheely-basket. Richard takes the wheely-basket from me. I head over to the furthest aisle and start going through my (very long) shopping list.

I race around a corner, grabbing things off shelves as I fly past, stacking them in my arms. Richard and the wheely-basket overtakes me.

I can only wonder what the other shoppers made of this strange shopping duo!

Not to mention the pained “Man-Being-Forced-On-Saturday-To-Do-Grocery-Shopping” expression on Richard’s face, which in itself halved my shopping list.

(Richard’s expression reminded me of my Dad’s when my mother takes him along to “pay her accounts”, which is code for dress shopping.)

Grocery shopping with Richard has definitely set a new world record. We were in an out of A&C Mall in 9 minutes flat!

My mother says Richard is my guardian angel. And she is right. 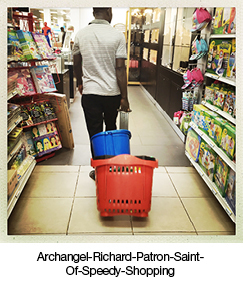 PS Today (Sunday) Richard called to ask why I was not answering the phone? He was worried. Was I safely back from my surf-outing in Kokrobite? (And he does not even work on a Sunday!) Richard is something else.